Home / News / Uncategorised / Plastic Band Reformed. We did it!

Plastic Band Reformed. We did it! 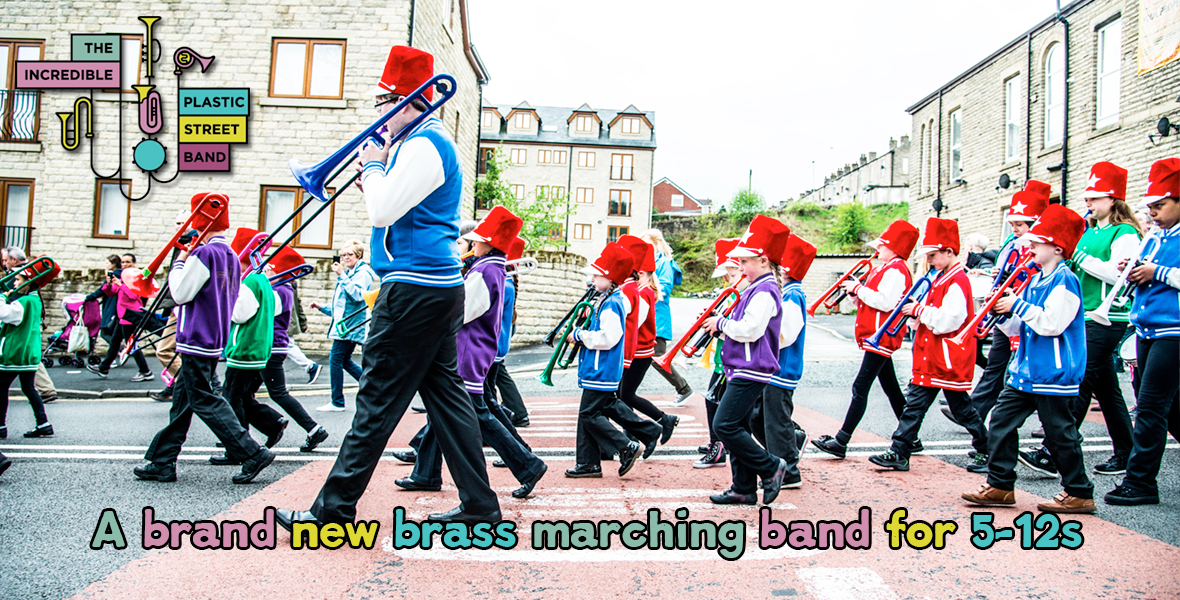 Plastic Band Reformed. We did it!

The Incredible Plastic Street Band, a 30-piece brass marching band from Tameside, is poised to resume rehearsals at The Vale in September!

Following a successful crowdfunding campaign the band is now in a position to take up trumpets, trombones and drums once again, making music all around Tameside, Oldham and Saddleworth.

Initially a project supported by Youth Music, the Incredible Plastic Street Band was first in existence for a three month period, during which an intensive schedule of tuition, rehearsals and marching practice was thrown at the young musicians. Aged between 7 and 11 years, they then performed in the Mossley Whit Walks and in a showcase concert at their home venue here at The Vale.

To continue the band as a training and performing resource for the local community, Leon Patel of Bangdrum CIC initiated a Kickstarter appeal, headed by project manager Beren Airstone. “I want to be in the plastic band forever-nothing can stop me!” said one of the young musicians. This energy was matched by a huge amount of support from parents, friends and well-wishers, the campaign target was achieved and the band’s future assured.

The band was formed after the successful delivery of The Vale Music Ensemble in 2015 led by local social enterprise Bangdrum CIC. Through the project they saw the need to invest into the development of the local youth brass provision in the area. Leon Patel of Bangdrum said “We saw clear difficulties in engaging young people [in The Vale Music Ensemble] who already played brass, this led to us questioning with such a strong brass tradition in the area why that was.” He added “After talking to the local brass bands and Brass Band England it soon became apparent that brass bands themselves were struggling to recruit young people into their learner bands so we decided to do something about it”.

What now? Rehearsal space has been made available to the band at The Vale. Paul Exton-McGuinness has stepped into the tutor/artistic director role and the Incredible Plastic Street Band already has concert and parade bookings over the autumn and winter. Continuing support by pBone, makers of the plastic trombones and trumpets, has been guaranteed and a brand new instrument, the pBuzz, can now be offered to the band’s youngest musicians aged 5-6 years old.

To find out more about the Incredible Plastic Street Band including how to join visit www.vale-music.co.uk

Poised on the brink of a new era, the band and everyone who has an interest, is renewing hope in music and brass playing for young people in the local area are seeking further support.

Financial support is the final link in the chain. In order to continue beyond 2016, the band requires fairly modest funding or backing.

With you, the community, behind the band, we hope to give it a life beyond it’s first incredible year!

For more information of how you can support the project please contact us.