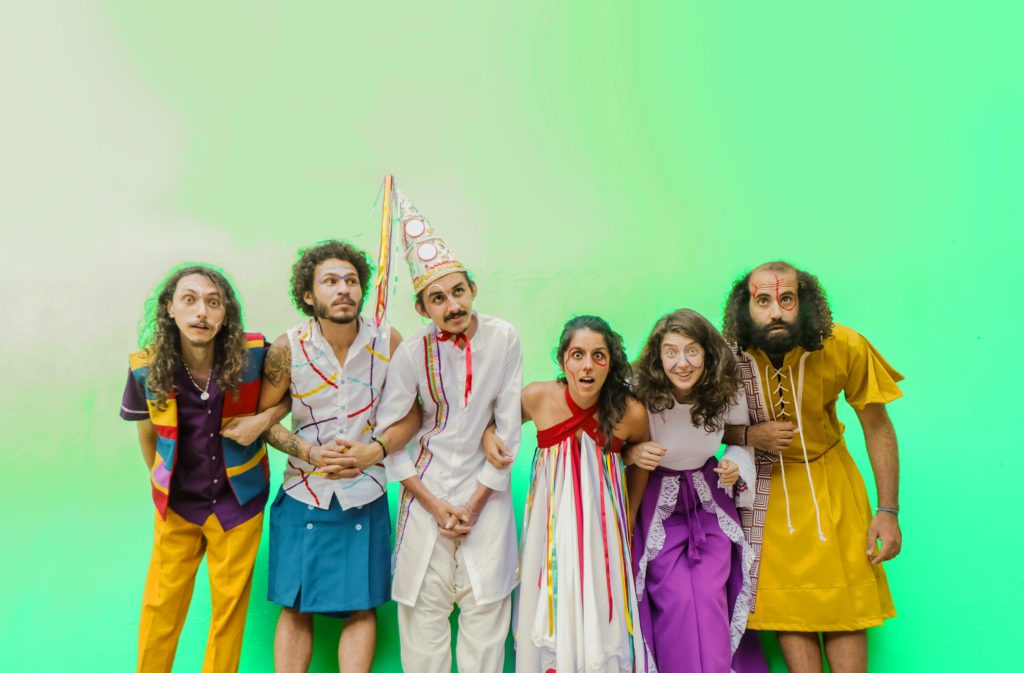 The Vale are excited to welcome these talented musicians who travel the whole world, travellers who make music all over the world; A whole world that becomes music and travel. It’s hard to explain what Čao Laru is about, this band that has been conquering ears, minds and hearts around the world since it was born in 2016 in Rennes (France).

Their sound is an explosive mix of Brazilian, Latin and Mediterranean rhythms. Their live performance is mesmerising because it combines elements of dance and theatre. Although sung in Spanish, Portuguese and French, their songs speak a universal language, communicating to all audiences.

And they’ve been doing it for years: they’ve been to more than 23 countries, always on a Kombi van when in Brazil, and a motorhome, when travelling through Europe. They played at big festivals and also at friends’ houses, in the most sumptuous theatres and on the most common sidewalks. For them, it doesn’t matter where. And for the public, it makes no difference either: watching Čao Laru live is an unforgettable experience wherever you go. Just ask who has been to it.

Čao Laru is also a strong band in the studio. All musicians play more than one instrument, sing and compose. It’s a real travelling musical powerhouse! In these 6 years, they have already released 4 albums. The most recent is “Libre” (2020), which received several positive reviews in the South American and European press. The album was released by the Brazilian label Pequeno Imprevisto. The “Libre” tour starts in Brazil in May 2022 and lands in Europe between August and October.

We are also proud to present Emily & Mambo, returning to the our stage once again with their cross-continent sounds to support Čao Laru

Jon Mambo is a guitarist, vocalist, bass player and writer. He got his nickname ‘Mambo’ from earlier years as guitarist in the Manchester based Afro-Latin Jazz ensemble ” The Mambo’s”. His focus right now is on Brazilian and African style music played on the acoustic guitar and electric bass, and delving into the rhythmic and percussive foundations of the music.

Emily is a singer from Manchester whose powerful voice has sung in many different genres from classical to funk. From an early age she trained as a Soprano and at the age of 18 was asked by the famous ‘Iain Mellor’ to sing a Brazilian song with the then Brazilian Percussion collective Cabasa and the Northern Chamber Orchestra. Since this introduction, Emily has been hooked singing songs from all over Brasil for large percussion outfits. Emily has enjoyed belting songs over 40+ drummers over the years and is now enjoying a more laid back approach as a duo!

Together they form Emily & Mambo, a dynamic duo whose music crosses genres, languages and styles. Their repertoire includes covers of infamous and underground tunes all sung in poetic Portuguese.