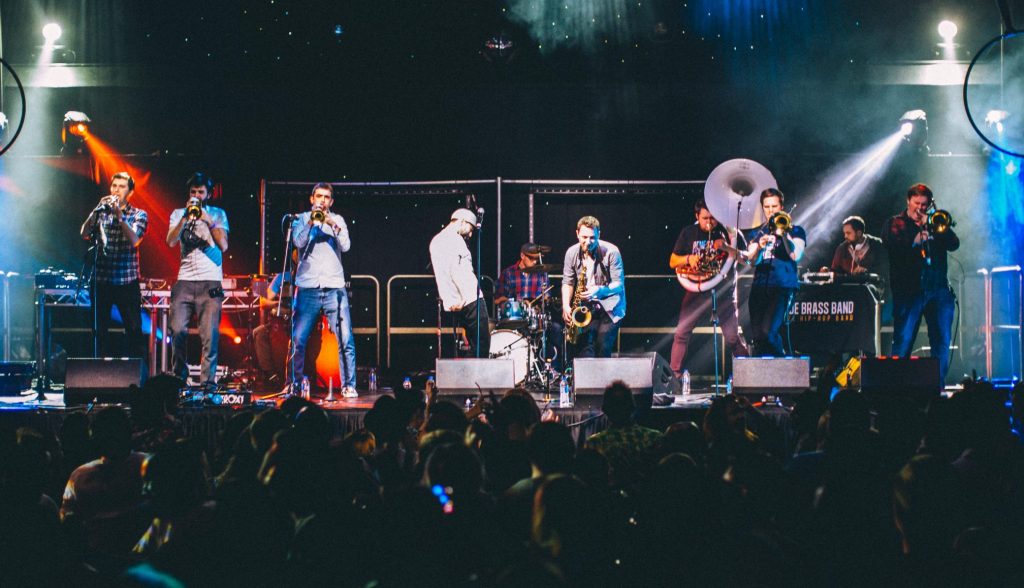 Renegade Brass Band combine a big brass sound with raw hip-hop vocals and beats, and have built a huge live reputation as a headline act.  RBB have played packed-out shows at venues around the UK and Europe, and their unique sound and energy has seen them support acts such De La Soul, Busta Rhymes, Grandmaster Flash, Public Enemy, The Cat Empire, Jamie Cullum, Quantic, Craig Charles and many more.

A hit with festival crowds across the world, the band have played at festivals including Glastonbury, Java Jazz Festival Jakarta, Dubai Jazz Festival, Sea Sessions Ireland, Stuttgart Jazz Festival and Soundwave Croatia.  They have performed live sessions for BBC6 Music’s Craig Charles Funk & Soul Show, and have had airplay from BBC6 Music, BBC Radio 2 and Radio 1 in the UK, as well as a host of international TV and radio stations.

“Off. The. Scale! Brilliant.  The best wake-up call ever”
(Chris Hawkins, BBC 6 Music)

Their latest EP, ‘The Abbey Road Sessions’ was launched in October 2018, following a live recording taken at the legendary studio.  Their most recent studio album, ‘Totems’ was launched in 2017, seeing the band further develop their hard-edged brass sound.  The band released their debut album, ‘RBB: Rhymes, Beats & Brass’ in August 2014, and followed it up with their 2015 ‘RBB: Rhymes, Beats & Brass (Remixed), featuring collaborations with artists such as Hugo Kant, Colman Brothers and Tall Black Guy.  They have also appeared on albums by The Herbaliser, Rodney P and Harleighblu, and provided live horns for acts including Diesler, Public Service Broadcasting, Sam Redmore and Reverend & The Makers.

Grab your tickets today and get down to big brass sound with us.