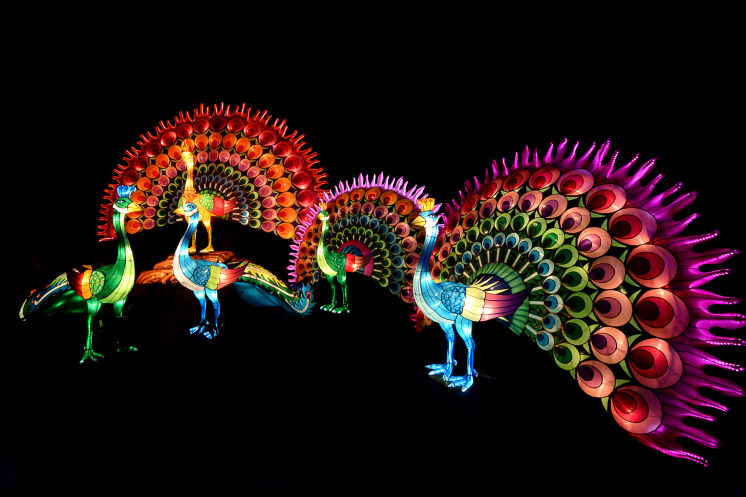 We are delighted to announce a special artist shadowing opportunity to create two large scale peacock puppets to include in this year’s parade.
As part of the Global Grooves ‘Creating Carnival‘ programme, Mossley Light Festival will host an incredible week of making with one of the UK’s very best visual arts practitioners. The amazing Iola Weir will be working alongside the Creating Carnival core artist team to guide us through the design and development of this exciting and unique giant puppet project .
During the week we will explore the second phase of our puppet making process by turning our prototype puppet frames (developed by Mossley’s very own making guru Mike Green) into unique peacock lantern puppets that will become part of the parade for Mossley Light Festival.
Working from our professional, fully resourced carnival arts studio at The Vale, you will have the opportunity to shadow our internationally acclaimed lead artists to create some truly unique works of art based on technology developed for the BBC’s ‘Walking with Dinosaurs’ show.
This opportunity is suitable for artists who have an interest, thirst and previous experience in visual arts, construction and making for outdoor events. This is not a workshop or masterclass, but an opportunity to shadow Iola and the Creating Carnival team and input into the development of new work.
Where? The Vale, off Micklehurst Road, Mossley, OL5 9JL
When? 5 day shadowing opportunity  | 21st September – 26th September
Book here
About the Lead Artist Team
Iola Weir

Iola is an interdisciplinary artist who designs and creates costumes, structures and make-up for carnival, large-scale events and theatre. She has an ongoing practice in project and production management, as well as leading volunteer, artist and community training. Some of the past projects she has worked on have included Baku 2015 European Games Opening and Closing Ceremonies, Royal Opera House Deloitte Festival, Rugby League World Cup Opening Ceremony and The Paralympic Closing Ceremonies in London 2012.
Emily Wood
Emily is the Artistic Director of Mossley-based carnival arts organisation ‘Cabasa Carnival Arts‘. Emily’s vision to spread the techniques and traditional methods of costume development and fabrication has already made huge leaps in the quality and appeal of carnival artistry in the Northwest. Her work in the Northwest and beyond is ever gathering momentum; her portfolio already boasts several large-scale outdoor carnival events including Creating Carnival, Journey Of the Orixas, The Great Garden Carnival, Junk Jam , Manchester Day Parade, Liverpool Brazilica Festival and Manchester Jazz Festival
Rowan Taylor
Rowan is a freelance artist, designer and maker and is a Lead visual artists as part of the Global Grooves ‘Creating Carnival‘ team and a Future Leaders 2015/16 graduate. Rowan studied Textiles in Practice at the Manchester School of Art with a focus on embroidery, mixed media and print. In more recent years she became passionate about the vibrant and exciting world of carnival and the fantastic ways in which this art form is being used to inspire communities. She has worked as a lead artist with Mossley’s own Cabasa Carnival Arts and internationally renowned NPO Walk the Plank.
About Global Grooves
Global Grooves is an artist-led carnival arts organisation based in Mossley. They bring together the very best culturally diverse artists from around the world to create stunning carnival presentations, develop next generation artists, incubate companies, stimulate innovation in the sector and inspire diverse communities to participate in carnival, both across UK and internationally. Global Grooves are funding and producing this year’s parade and workshop elements for Mossley Light Festival. You can read more about Global Grooves here.
About Creating Carnival
Following an incredible parade at Liverpool Brazilica and static performance at Manchester Jazz Festival the Creating Carnival crew are gearing up to re-tell their story at Mossley Light Festival parade with a specially develoed night-time version of the show.
The performance celebrates ‘The Tempest’ a classic Shakespeare play retold through global carnival traditions. Featuring influences from the Devil Mas of Trinidad and movement and rhythm inspired by Afro-Brazilian deities, the literary characters of Caliban, Prospero and Miranda will join this year’s parade with a specially commissioned ‘light’ element. Read more here
+ Google Calendar+ Add to iCalendar